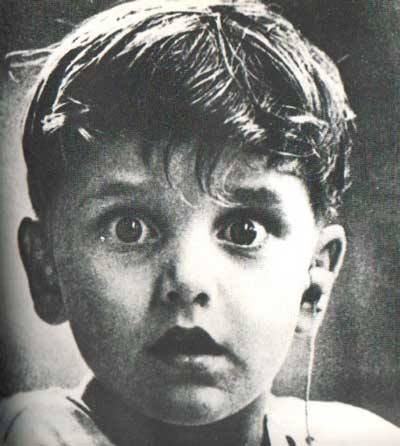 When “Seeing What You Want” Isn’t Enough

This photo captures the moment when a boy hears sound for the first time after being fit by doctors with a hearing aid.

The boy’s name was Harry Whittles and the photographer Jack Bradley.

Little else about the photo is known. And that may be what makes it all the more poignant.

My first impression was, Wow! He must be so amazed and overjoyed to hear music for the first time or, perhaps, his mother’s voice!

It’s an easy assumption to make.

But is it true?

If you watch videos of children today who are fitted with cochlear implants, the responses to “activation” — that first moment when the device is turned on — vary widely. Some kiddos laugh. Some gape like little Harry. And some react with sheer terror, screaming and clawing at their ears.

Seeing this, I realized that this photo captures a phenomenon far greater than what I (as a hearing person) first assumed.

It doesn’t just capture the moment someone is “given the gift of sound” but rather of that far more universal experience — having one’s entire reality blown apart.

We’ve all had those moments: We think we know the parameters of our lives, and then suddenly, without warning, they shift. And what you believed today, will not be, cannot be, what you believe tomorrow.

So it is, I imagine, with Harry. Despite his having known life to be one way, in that instant, his certainty was shattered. In the long-run, of course, the ability to hear will likely prove a good thing. But that doesn’t change the intensity — the overwhelming mix of awe, panic, and utter disbelief — of that definitive moment when his life went sideways — and would never be the same again.

Realizing this made me really bummed about my first assumption. And its superficiality.

I’m not sure why I’m going on about this. I guess because I didn’t want to post this intimate photo with the assumed tagline: “Boy Overjoyed to Hear for First Time!” because, after giving it some thought, I don’t believe that’s the full truth of it.

And maybe I just liked the idea of challenging myself to look beyond my first knee-jerk assumption. To dig a little deeper. And try to step further into someone else’s shoes.

Empathy, that art, and most critical aspect of being human, that seems to have become increasingly rare in an age hell-bent on promoting the practice of “rush-to-judge” and “label-and-move-on.”

I guess this morning I just wanted to hit the pause button on that tendency. To resist the seeming ease of it. And try another way.

← The Aliens Are Here