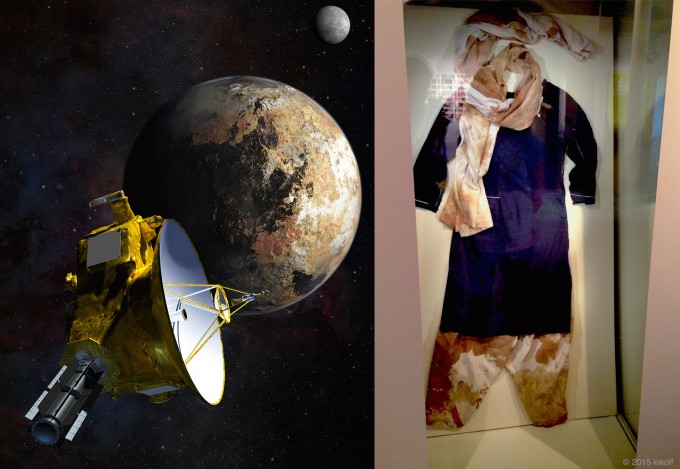 Do you ever have one of those days when you can’t quite bear the dichotomy that is humanity?

When the sheer marvel and terror of our actions make you wonder if we all are — truly — of a single species?

When the range of our possibility seems at once limitless and, then, lost?

In the last few days, I came across two powerful and unrelated events that I suddenly realized were poised to converge. Their imminent collision caught me by surprise. And really struck something inside, as it brings humanity’s baffling duality into the highest relief.

First, on July 14th, after a 10-year journey, the New Horizons spacecraft will fly by Pluto, thereby bringing to a close the first era of humankind’s space exploration in which we sent craft to investigate every major planet in our solar system.

This is an astonishing milestone put into stark perspective by the words of science writer Dennis Overbye: “None of us alive today will see a new planet up close for the first time again.”

The second event will take place shortly before this, right here on Earth. On July 12th, Malala Yousafzai — a young Pakistani girl shot by the Taliban because she demanded that girls be allowed to attend school — will celebrate her 18th birthday, thus reaching the symbolic end of an era she almost lost — her childhood.

The photos above say what words cannot.

The image on the left is an artist’s rendering of the New Horizons spacecraft as it flies by Pluto at a speed of 36,000/mph — over 3 billion miles from Earth — from where it will take its closest photographs of the icy dwarf planet and transmit its atmospheric data back to NASA. What these long-anticipated images and information will reveal remains a tantalizing mystery.

The image on the right is Malala’s school uniform — the one she was wearing the day a gunman boarded her school bus and shot her point-blank in the head. She recently consented to having the uniform displayed at the Nobel Peace Center in Oslo where I was fortunate enough to see it.

Having survived the attack, Malala went onto become the youngest recipient of the Nobel Peace Prize, as well the founder of The Malala Fund through which she actively fights for every child’s right to education. She also went back to school.

Rampant exploration of the stars and the gunning down of a child — that human hands can author such contrary actions, in such proximity, never ceases to stun and bewilder me.

Greater minds have devoted reams of paper to the problem, of course.

And a thousand things could be said. And wondered. From a thousand different angles.

But that’s not what I wanted to do today.

Today I simply wanted to highlight the connection between two distant events.

And let them stand, as they do, side by side.