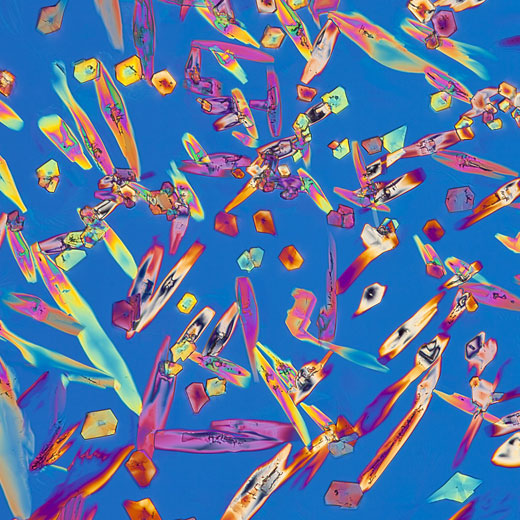 The Left Hand of Darkness

Did you know that all life on Earth is left-handed?

The handedness I’m referring to lies in the essential building materials of life — amino acids.

Amino acids are the components needed to build the proteins upon which all of life — and its infinite complexity — depends.

It turns out that of the twenty or so amino acids utilized in living systems, every one of them comes in two configurations: left-handed and right-handed. One being the geometrical mirror of the other.

And while both versions are viable and widely available, they are not structurally compatible. In other words, one cannot serve as a substitute for the other in the assembling of intricate protein chains. Attempting to do so would be like trying to make a right-handed glove fit a left hand.

Given this reality, life could not employ a mixture of the two configurations in its vital and gorgeous chemistry — one that results in a limitless span of materials from brain plumes to gossamer webbing, from vibrating filament to sharpened claw. In order to achieve this complexity life had no choice but to choose a single handedness.

And it chose the left.

So much so that if you were to melt any creature or cell that we know of into a pool of basic components, you would find only left-handed amino acids in the puddle.

Why this is so remains a mystery. One that keeps many scientists awake at night searching for answers. Or, at the very least, clues.

And while I wouldn’t even hazard a guess as to why life prefers one direction over another, when I first heard the suggestion of handedness originating in outer space, I was filled with a sense of déjà vu.

Hadn’t I read something related to that before? I couldn’t recall.

Then, while out for a walk, a little mini idea tornado swept in and before I knew it subconsciously wound together the relevant, semi-forgotten items.

First I remembered that yes, I’d read about another discovery involving left-handedness. And this one from a far different frontier — that of the cosmos.

In searching for an intergalactic-sized magnetic field that his theories suggested might exist, a professor of theoretical physics at Arizona University and his team analyzed data from NASA’s Fermi Gamma-ray Space Telescope (FGST). Gamma rays (essentially high-energy light) are produced in very distant sources (such as black holes) and are sensitive to magnetic fields. The team therefore hoped that by studying the distribution and bending of the gamma rays as they traveled toward Earth they could detect the influence of a magnetic field. (Similar to how iron filings reveal the shape of the field around a magnet.)

What they reported finding was not only evidence of a pervasive magnetic field that spans the entire observable universe, but also evidence that this vast and primordial field spirals in a single direction. One that is essentially left-handed.

(The professor had theorized a left-handed magnetic field as part of his explanation for why matter prevails over anti-matter within our universe. While not yet proven, you can read more about this aspect of his theory here and here.)

Naturally I became excited by even the mere possibility that a certain handedness might be shared between the earthly sculptors of life and the vast fabric of the universe.

(And though I’m a southpaw and loyal to my clan, whether the predominant direction is left or right is not what matters — these being arbitrary and human-created values — what’s truly exciting, though, is to imagine a shared propensity for one direction over another in scales ranging from the microscopic to the cosmic.)

Then, while digesting all of this, I happened to look down and notice the symbol on my hiking shoe. (The logo for Salomon, plus a little hitchhiker.)

But rather than depicting the different configurations as separate and discrete, the symbol united them into a single and distinctive entity. A compelling coherence.

That got me thinking — if we exist in a universe defined by a tendency toward left-handedness, might not another exist with a tendency toward right-handedness? What might it be like? And are we, then, and our entire configuration of life, but one half of a far greater assembly? An unimaginably vast and purposeful chirality?

That thought then reminded me of Ursula LeGuin’s celebrated novel, The Left Hand of Darkness, and the words of its central poem:

Light is the left hand of darkness
and darkness the right hand of light.
Two are one, life and death, lying
together like lovers…
like hands joined together,
like the end and the way.

As the poem illustrates, the melding of opposites, of dualities — however unlikely — is a hugely important theme in LeGuin’s novel. As is the idea that only within the unifying of opposites does truly great potential reside.

Which made me wonder — how might we feel differently not only about the life on this planet but the very existence of life at all, if we realized that our entire living reality represented but one side of a two-sided coin?

Each opposing face brilliant on its own. But infinitely more meaningful when viewed together as a whole.

And I have to wonder, too, if one day we might discover that such a strange cohesion represents — either symbolically or literally — a third and consummate way of being. A rare but fated ambidexterity, waiting to be known.