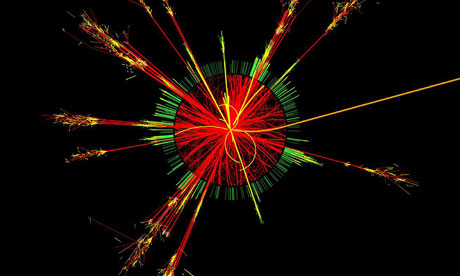 Have you ever gotten caught up in one?

It’s when – without warning – various bits of information slam suddenly together into a swirling idea about The Big Picture.

Such ideas are often as voracious and relentless as cyclones – and grow in size the further they track in one’s mind.

Here’s a highly speculative one that arose not terribly long ago.

First, the bits that slammed together:

(I’m sure there are more but these are the ones I can recall.)

1) The Large Hadron Collider recently came back online to smash subatomic particles at record-breaking energies. Leading physicists the world-over to speculate about what exotic, unknown particles might be produced.

2) I read the book: Life Itself: Its Origin and Nature by Francis Crick. A highly provocative little tome!

Written in 1982 by the Nobel laureate and co-founder of DNA’s spiral architecture, the work proposes a theory for how life on Earth might have begun. After a fascinating narrative into the mechanics and mysteries of life’s beginnings, Crick describes what he calls “directed panspermia” – a theory of how a civilization far more advanced than ours might have intentionally seeded our universe with microorganisms via unmanned, long-distance spacecraft. Reasons for the seeding stretch from the desire to prepare a neighboring universe to support future civilizations, or perhaps as a means of growing needed microbial resources etc.

Now I know this all sounds looney, but Crick was an intellectual powerhouse and his thoughtful and rational path to this conclusion is supported by hefty expertise in fields ranging from molecular biology to cosmology. Additionally, his description of the path toward discovering the mysteries of DNA is particularly moving. And, unlike many of his colleagues, Crick shares his ideas in a way that is exceptionally keen, yet humble.

3) Sifting through a pile of random articles, I scanned one about Anton van Leeuwenhoek’s discovery of microbes back-to-back with one outlining the latest theory on dark matter. Shifting suddenly between these two orders of magnitude turned my mind again to the immense scope of our known reality — from the infinitesimal quark all the way to the mind-blowing scale of cosmic bodies measured in light years. And this got me thinking about the far vaster and infinitely smaller worlds that without a doubt must exist beyond those our 400 years of modern science have so far managed to uncover. Realities we have yet to even imagine.

Then, while hiking, for whatever reason, all these bits spontaneously collided into a funny yet compelling thought:

What if the phenomenon we call The Big Bang – a theoretically explosive event in which all the energy and space of the universe was unleashed from a singular, ultra high-density point – was actually the result of a higher form of life smashing particles in their version of a high-speed collider?

Is it possible that our Big Bang – the event that gave rise to all we know – resulted from an intentional collision, with unpredictable results?

But this one question begs so many others. Each requiring a plausible answer to make the whole work. Or not. Which is what makes the challenge of it so whacky. And fun. And tornado-ey.

In that light, the question of whether or not such an idea might be true, or even possible, is irrelevant. Because value enough lies in the exercise of expanding the scope of our imagination beyond the known. Beyond the familiar places and dimensions where we feel comfortable. And secure.

To dare, instead, the eye of the storm.

Photograph: Cern/PA. A collision event recorded by Atlas at the LHC.