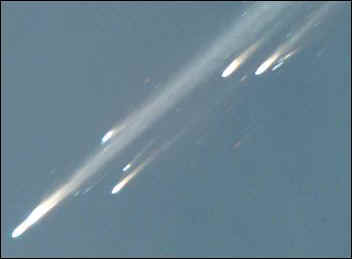 The so-called Spacecraft Cemetery is a remote area in the Pacific Ocean, southeast of New Zealand, thousands of miles from the nearest land.

It is where defunct spaceships are sent hurtling to their deaths.

The remote and untraveled area was chosen to insure that no one would be harmed by falling space debris.

But, of course, “remote and untraveled” refers only to human traffic.

After reading the article below, I started to wonder what the burial of a spacecraft would be like for the ocean’s inhabitants. And so wrote the words below.

Afterward, I started to wonder when — and for what reason — the beliefs we have of our world might be similarly blown apart.

on this part the ocean,

an acre of south pacific

the sun lifts above the horizon

spilling her pail of sparkles

across a rolling blue belly

we are so distant from the land,

so far from the world where

except the rare ones who

dash the distance between

nothing in this morning’s daily ritual

has triggered an alarm

and no warning been sent

but the sky is falling

in a distant room

this acre of south pacific

that does not even exist in the myths of

batters its way through space

in what is called a controlled descent

in this perfect plummet of control

Mir will be ripped and shattered

by the butchers of speed

into millions of molten pieces

that will fall fast enough

to drill their own graves

into the deepest brine

in a roar loud enough

to deafen even confusion

after the cheers in the control room subside

and the ocean’s skin smoothes

and the sun drops into her shadow

the fish elders will lie awake

and updating their myths

Photo credit: Mir breaks up upon re-entry into the Earth’s atmosphere. Photo taken above Fiji on Friday March 23, 2001. Photographer unknown.