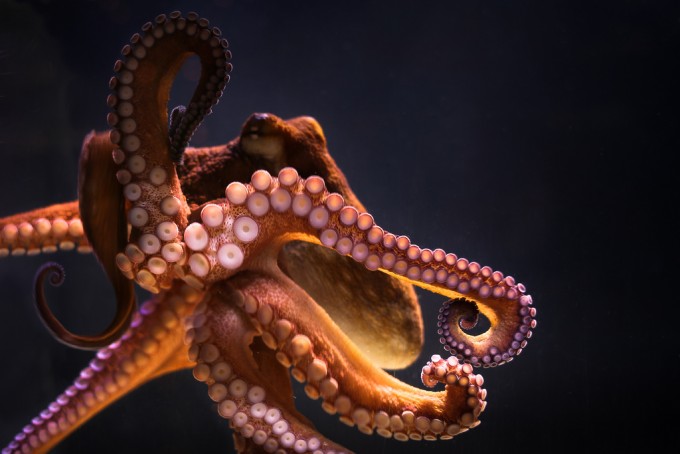 “It’s hard to find an animal more unlike a human than an octopus… No sci-fi alien is so startlingly strange.”

“Here is an animal with venom like a snake, a beak like a parrot, and ink like an old-fashioned pen. It can weigh as much as a man and stretch as long as a car, yet it can pour its baggy, boneless body through an opening the size of an orange. It can change color and shape. It can taste with its skin… But most intriguingly of all… octopuses are remarkably intelligent.”

In her book, The Soul of an Octopus, naturalist and author Sy Montgomery poetically explores the world of the often-maligned yet eternally mysterious undersea maven.

What strikes me as perhaps the most profound aspect of the book is her exploration into the vastly different sensation of reality that the octopus possesses.

As with many other creatures, their sensory perceptions are so unlike our own that even the power of imagination may not grant us a taste of their realm. Yet we live side by side.

Nowhere is this phenomenon more elegantly captured than in the author’s description of meeting Athena, a two-and-a-half-year-old octopus, for the first time:

“As I hold her glittering gaze, I instinctively reach to touch her head…to my surprise, her head is silky and softer than custard. Her skin is flecked with ruby and silver, a night sky reflected on the wine-dark sea. As I stroke her with my fingertips, her skin goes white beneath my touch. White is the color of a relaxed octopus; in cuttlefish, close relatives of octopus, females turn white when they encounter a fellow female, someone whom they need not fight or flee.

It is possible that Athena, in fact, knows I am female. Female octopuses, like female humans, possess estrogen; she could be tasting and recognizing mine. Octopuses can taste with their entire bodies, but this sense is most exquisitely developed in their suckers. Athena’s is an exceptionally intimate embrace. She is at once touching and tasting my skin, and possibly the muscle, bone, and blood beneath.

Though we have only just met, Athena already knows me in a way no being has known me before.”

Here’s a neat video where a biologist explores the mechanisms behind the cephalopod’s remarkable ability to alter the color and texture of its skin: