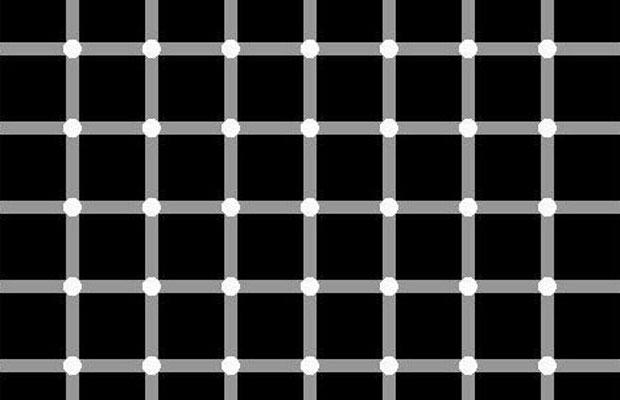 The alignment of our outer existence with its inner representation has been distorted by the idiosyncrasies of human evolution. That is, natural selection built the brain to survive in the world and only incidentally to understand it at a depth greater than is needed to survive. The proper task of science is to diagnose and correct the misalignments. The effort to do so has only begun.”

(Watch how the dots in the above image change color, despite being static. In other words, it’s your brain that’s shifting the colors, not “reality.”)

It’s crazy to think about how far-reaching the impacts of our limited/selective perception. Seriously. Think about it. There’s nothing in our experience that isn’t affected. Not one thing.

In fact, here’s a fascinating study I recently came across that fully supports Wilson’s point:

“Scientists at the Hebrew University of Jerusalem and in Germany and the USA show that the way in which the brain organizes its visual sense remains intact even in people who are blind from birth, and that at least the pattern of functional connectivity between the visual area and the topographical representation of space (up/down, left/right, etc.) can develop on its own without any actual visual experience.”

In other words, the neural hardware that enables our visual perception of the world develops in a very specific way no matter if we’ve seen the actual world or not. We are, in a very real sense, pre-programmed to visually experience the world through a particular lens. And would seem, on the face of it, to have no choice.

I’ve no doubt that the same story holds true of our other senses and perceptions. We are built to perceive — or not perceive — things in a certain way.

Knowing of these limitations it would seem impossible not to be compelled by Wilson’s call for us to “diagnose and correct the misalignments.” To keep challenging and fine-tuning our perceptions to see what is actually out there.

Not what we think we see. Or want to see. Or hope to see.

But what is actually there.

This would seem a worthy life’s pursuit for our little species.

Near impossible as it is, I have to believe we’re up for it.

(Just maybe not in the ways we might currently imagine.)