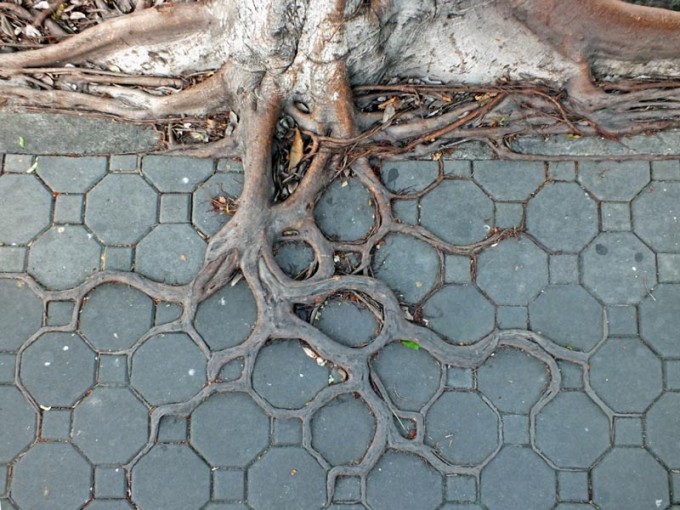 “If you are among those who think of roots as nothing but dull appendages sleeping peacefully in the stuffy dirt under a plant, you may be interested to know of their real adventures…”

–Guy Murchie, The Seven Mysteries of Life: An Exploration of Science and Philosophy

As a child I remember setting an avocado pit in a glass of water. Then watching in amazement as, over the course of several weeks, it sprouted a beard as unkempt and rascally as a pirate’s.

How was such a thing possible?

How could such shivery fibers be emerging from a rock hard pit?

And how could all those feet of pale root have been stuffed inside such a small space?

Later in life I would be equally amazed by other feats of the avocado’s rooty cousins — like the arching sea serpent spines of kapok trees, the taut cables of wisteria (with the power to snap iron railing), and the stilted stork legs of the walking palms.

All of these were cause for wonder.

But I don’t think I ever fully appreciated the magnitude of rootdom until I read the exquisite description of its secret and harrowing life in Guy Murchie’s breathtaking masterpiece.

Ever since reading his observations, I’ve never been able to gaze out at, as he calls it — The Realm of the Vegetable — in quite the same way. And what once seemed a calm forest floor I am now aware seethes with invisible tempest. Part epic battleground, part sacred altar.

Maybe his words will have the same effect on you.

Here’s the rest of the passage I have in mind:

“If you are among those who think of roots as nothing but dull appendages sleeping peacefully in the stuffy dirt under a plant, you may be interested to know of their real adventures while aggressively hunting for water, air and mineral foods, which means fighting many a pitched battle against competing roots or animals, intermingled with making friendly, constructive deals with rocks, sociable molds, worms, insects and, more and more frequently, man.

At the tip of each advancing thread of root is a root cap, a sort of pointed shoe or shovel made of tough, barklike, self-lubricating stuff that the root pushes ahead of it and replaces constantly by cambium cell division inside as the outside is worn away and turned into slippery jelly by passing stones, teeth, running water or other antagonists.

But the tiny root cap is only the first of several specialized parts which, working together, enable the root to steer its zigzag or spiral course, skirting serious obstacles, compromising with offensive substances, judiciously groping for grips on the more congenial rocks, secreting powerful acids to dissolve the uncongenial ones, heading generally downward in search of moisture and minerals while ever careful not to run completely out of air…

Close behind the root cap as it advances comes the meristem, the botanist’s name for the concentrated terminus of the cambium layer which literally never grows old. This is where the root cells divide at their fastest, and it is followed immediately by the zone of elongation where they gorge themselves with water and expand like hydraulic jacks, relentlessly forcing the root cap ahead of them.

Then in turn comes the zone of root hairs, the unseen beard of microscopic filaments sprouting straight out of cellular protoplasm and providing the tremendous surface needed to absorb water out of dry soil fast enough to sustain not only root growth but the health and metabolism of the entire tree.”