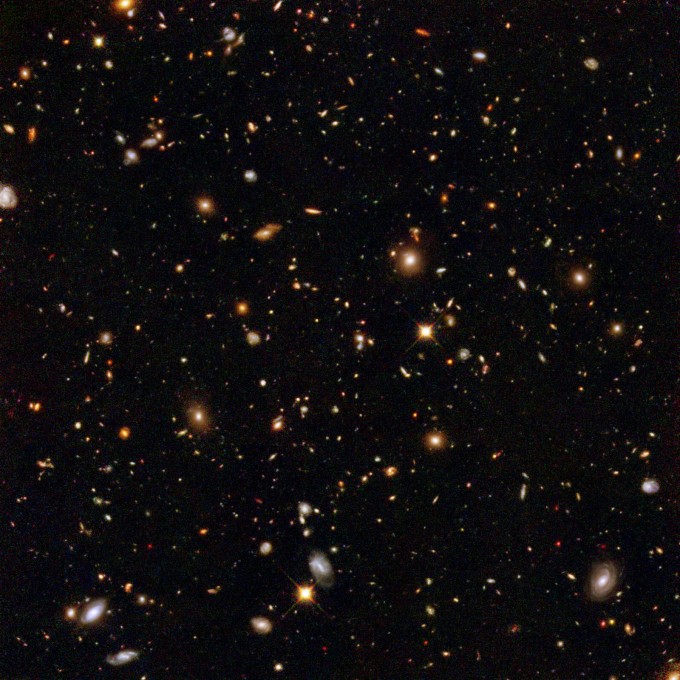 When we first saw the Hubble Telescope image revealing thousands of galaxies just like our own floating in deep space, our perception of who we are – and where we are – changed forever. Recent measurements, however, suggest a new imagery that might be set to change our perception yet again.

This just in from NASA:

A sounding rocket experiment has detected a surprising surplus of infrared light in the dark space between galaxies, a diffuse cosmic glow as bright as all known galaxies combined. The glow is thought to be from orphaned stars flung out of galaxies.

The findings redefine what scientists think of as galaxies. Galaxies may not have a set boundary of stars, but instead stretch out to great distances, forming a vast, interconnected sea of stars.

At first glance this would seem a very bland and unassuming statement.

But what it means is that the Hubble image above might only be half the picture. Or an 1/8th. Or less than a sliver.

In other words, up until now, we’ve commonly viewed space, more or less, as a vacuum studded with whirling, autonomous galaxies. Such an image creates a very particular view and sense of reality.

But is it accurate?

And while the discovery of galactic clusters is an amazing shift in perspective, this most recent one – that galaxies might not be the autonomous bodies we’ve always believed them to be – seems to have the potential to trump it.

And I wonder if one day this discovery might prove to be a major tipping point.

Here’s a little metaphorical journey to illustrate what I mean:

There’s an observer gazing at an X-ray on the wall.

Under the limits imposed by the observer’s perspective and the limits of their tools, only one quadrant of the X-ray is visible. Yet in that limited space, the observer detects a ghostly image. It appears to be a single bone. Small. Autonomous. Floating in black space.

Later, when changes in perspective and technological power allow the observer to see another quadrant of the X-ray, other small bones are discovered. These form a line that extends from the original one. The observer notes, however, that the bones do not physically connect — though there seems a logical progression in their relative positions.

Later, with further changes in perspective and even greater tools, the observer is able to view the entire X-ray and discovers the imagery of yet more floating autonomous bones.

But now, instead of forming an indistinct shape, a clear pattern has emerged.

There are, in all, five distinct lines of bones each projecting from a central plane in a star-like pattern.

Hmmm, the observer wonders. What could this be?

With one final leap in perspective and the aid of still greater tools, the observer at last discovers that the bones are not autonomous, per se, but are actually interconnected and interrelated by previously undetected, invisible matter (tendons, ligaments, skin). And that these previously undetected connections enable the bones to work in tandem. Thus forming the mechanical scaffold of a hand.

And so I can’t help but wonder if the revelatory concept of interconnected galaxies might someday prove to be a similar tip of the iceberg.

Leading us to one day discover how this isolated pattern connects to a far grander and unimaginable reality.

Only time will tell.