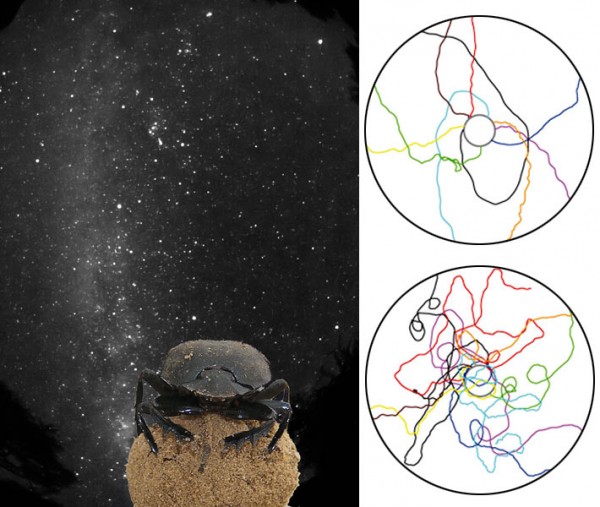 For centuries astrologers have insisted that the stars influence our behavior here on Earth.

And while I don’t want to weigh in on astrology (yet), there can be no doubt that cosmic bodies impact earthly behaviors — some of the most obvious being the moon steering the tides (influencing the activities of countless fish, corals, and microorganisms);  plants and other photosynthetic creatures trailing the sun;  birds and mammals navigating by the stars (including humans) and so on.

But here’s one influence neither scientist nor astrologer ever predicted:

Dung beetles, it’s recently been discovered, navigate by the light of the Milky Way.

Turns out the reason they can roll their enormous balls of treasure away from the competition in such direct lines (and in the middle of the night) is because they follow the illuminated fringe of our own galaxy.

The experiments devised by the scientists to determine that the beetles were using the galaxy’s light rather than that of the moon or stars are extremely clever and you can read more about them here. You can also see, in the illustration above, the degradation of their trails when denied a clear view of their cosmic compass.

What amazes me about this discovery is first, of course, the amazing mechanics behind the beetles’ navigation. What an incredible feat!

The other aspect that blows me away is that we’ve only now discovered it.

We live in such an amazing time where the efforts of scientists the world over are literally reshaping what we know, or believe we know, about this world on a daily basis.

I mean, if a distant spiral of stars and dust literally determines the pathway of a single beetle trudging across the African savannah, what other unseen and unconscious influences exist that we have yet to discover?

And how will these influences alter what we know of reality??

The ramifications are limitless.

← She had not known