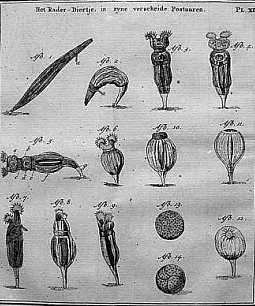 In 1676, a Dutch cloth merchant and lens maker sent the Royal Society in London drawings of fantastical creatures he’d observed while peering into drops of water with his home-made microscope.

The Society promptly ridiculed and dismissed the amateur scientist.

While scientists made massive headway in these other regions of knowledge, Leeuwenhoek’s earth-shattering discovery of the “animialcules” inside all manner of living materials languished. Of course research was conducted, but nothing on the order of the other two pursuits, with most investigations focusing narrowly on the microbes that cause illness.

But at last Anton and his phenomenal observations had their heyday. And the world began to study in earnest the limitless world of tiny lives just beyond view.

In fact, it is essentially Leeuwenhoek’s discoveries that are behind a recent revolution that’s become the darling of both science and popular culture alike.

By now most of us have read about, or at least heard of, this new frontier. It’s called:

This mysterious domain, as vast as its members are small, is currently viewed as a previously unrealized condition of the human body.

Essentially, the microbiome is “the ecological community of commensal, symbiotic and pathogenic microorganisms that literally share our body space.” —Joshua Lederberg

In other words, it’s all the organisms that live on and inside you that are not, technically speaking, you. In fact, each variety of microbe possesses its own genetic code that is in no way related to yours.

But differences aside, it’s the sheer numbers that prove shocking.

According to current estimates, the human body contains over 10 times more microbial cells than human cells.

Yup. For every one of “your cells” contained within your body, there are ten “not your cells” alongside it.

“To the extent that we are bearers of genetic information, more than 90 percent of it is microbial,” notes journalist Michael Pollan in his eye-opening article on the subject.

To give some sense of where the “others” reside, the graphs below show the human body’s many distinct “ecosystems” and the myriad microbes that call these places home.

Obviously this topic provides an unlimited number of avenues to pursue. As it is rich with new discoveries and unknowns. And begs questions that second-guess what it means to be human. Or not.

Are we the equivalent of the coral reefs — living skeletons built solely to house and nurture trillions of tiny lives?

Or, are we not single entities at all, but diversely populated SuperOrganisms tricked into thinking we possess autonomy?

While I don’t want to weigh in with any conclusions, I do want to raise two questions of my own:

Why, given Leeuwenhoek’s discovery of microbes in 1676, did it take so long for us to discover the proliferation of the “other” inside us and — why are we so shocked by it?

← A Passage from the Book-in-Progress