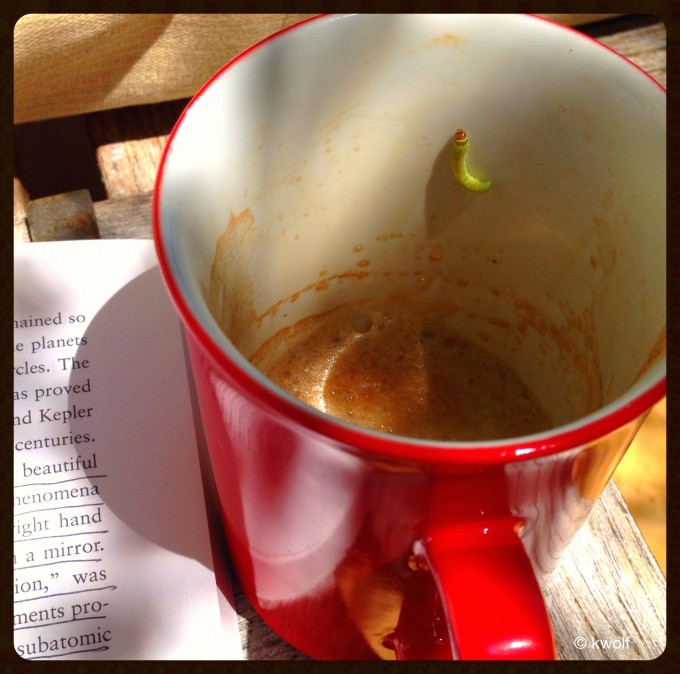 And what was the book I was reading when this little green friend appeared?

The Accidental Universe by Alan Lightman

A phenomenal book written by a man who is a rare breed: part theoretical physicist, part author.

“…More and more of what we know about the universe is undetected and undetectable by our bodies. What we see with our eyes, what we hear with our ears, what we feel with our fingertips is only a tiny sliver of reality. Little by little, using articial devices, we have uncovered a hidden reality. It is often a reality that violates common sense. It is often a reality strange to our bodies. It is a reality that forces us to re-examine our most basic concepts of how the world works. And it is a reality that discounts the present moment and our immediate experience of the world.”

I had the good fortune to meet Alan when we spoke together on a panel at the AWP Conference in Boston.

The title of our panel was “Religious Stories: Heretics and Humanists Shift the Perspective” and was the brainchild of author Mary Johnson whose book An Unquenchable Thirst had just been released.

We had a lively conversation that explored the realms of literature and science and myth and religiosity — where they mesh, and where they collide.

I had the chance to speak with Alan briefly after the panel. I found him to be an incredibly humble and soft-spoken man who, I soon discovered, does not use email. Ever. Doesn’t even have an account at MIT.

It’s likely due to this healthy distance from things that he’s gained a unique perspective on topics ranging all the way from artistic expression to cosmology to global activism.

And I promise I’ll post more about him and his books in the future.

A Passage from the Book-in-Progress →