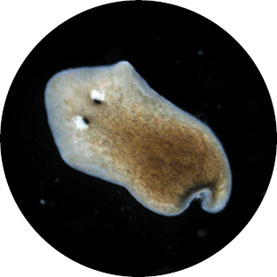 Have You Lost Your Mind?

If you happen to be a planarian then the answer is both yes… and no.

Scientists have famously described the planarian flatworm as being “immortal under the edge of a knife.”

If you cut off a planarian’s head, it will grow back, brain and all.

If you slice a planarian lengthwise or crosswise, its divided body will regenerate into two separate, whole individuals.

If you snip off a bit of a planarian as small as 1/279th its total size, that tiny morsel can regenerate into a complete organism in a few weeks.

If you think that’s amazing, listen to this:

If you cut the head of a planarian in half and leave the halves dangling on the organism’s body, the planarian can regenerate two whole heads on its single body and continue to live.

And while this little creature’s regenerative ability is worthy of awe and wonder, there’s much more to the story.

Back in the 1950-60s a very unconventional psychologist and researcher, James V. McConnell conducted some provocative experiments with planaria. The experiments involved instilling the worms with memories through training, then cutting off their heads (brains and all) and allowing them to regrow. After the animals had fully regenerated themselves, McConnell tested to see if the animals might have retained the memories he’d instilled before decapitating them.

Remarkably, his results suggested they had.

But how could that be??

Everyone knows memories are stored in the brain — a specific brain — so how could the “new” brain possess the memories discarded with the lopped off “old” brain??

Despite prevailing opinion, the results led McConnell to suggest that memories were not stored in the planarian’s brain at all, but elsewhere in its body and possibly within a component similar to RNA.

His disturbing theory was promptly ridiculed and set aside. (Not the first scientist to endure a harsh reception to unconventional results.)

You can read all the details about how they conducted the training and experiments on their planaria here.

Suffice it to say, their results supported McConnell’s observation that planaria can lose and regrow their entire head and brain and still retain memories that were instilled prior to decapitation.

In short, these scientists now support McConnell’s highly-criticized hypothesis that a planarian’s memories are not stored within the creature’s brain, but elsewhere.

So what does all this mean?

I think it means the conventional thinking on memory formation and storage needs to be re-imagined.

Up until now it’s been assumed that memories are stored in the organic matter of the brain. This belief is supported by the overwhelming evidence that creatures with damaged brains either lose memories entirely or have difficulty accessing them.

But is this the only conclusion that can be drawn from such evidence?

What if the brain is not the site of memory storage but rather the tool for retrieving memories from elsewhere? So that damage to the brain does not damage the memory itself but the tool necessary for accessing it?

In this case the clinical results would be the same (a victim of brain damage would struggle with memory recall or fail at it entirely) — but for an entirely different reason.

It is certainly provocative to contemplate the idea of memories being stored and retrieved from throughout the body, rather than solely within the brain.

As speculated in an earlier Wonderchew, isn’t the realm of memory far too complex and multifaceted to be overseen by a single organ? And shouldn’t we broaden our thinking to include the possibility that it isn’t?

The planarians and their lost minds seem to suggest we should.

← From Cell to Orbit